The 12 Dukes of Christmas is a series of heartwarming Regency romps nestled in a picturesque snow-covered village. After all, nothing heats up a winter night quite like finding oneself in the arms of a duke… 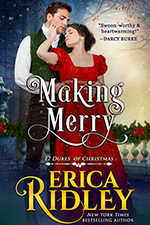 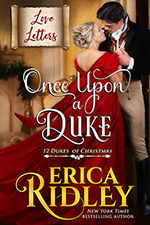 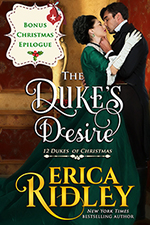 To enter: print out and color the 12 Dukes of Christmas coloring pages of your choice, or color them on your phone or computer.

Then post it on social media with hashtag #12Dukes, tagging @EricaRidley

If you don’t have social media, just email your fan art to assistant@ericaridley.com and you’re entered to win!

Every fan art is an entry to win… You can color all twelve!

Click to see the full rectangular image, then right-click to download (or press and hold on a mobile device.)

You can also print a PDF containing all of the coloring pages, or download the full-size images.

FAQ: Are the 12 Days of Christmas out of order?
You may have noticed each item from our true love makes an appearance in each book in order. But which order?
The lyrics of The Twelve Days of Christmas have varied by region and throughout history.
At the time of the Regency, the lyrics were:
FAQ: What is a locket eye miniature?
Eye miniatures, also known as lover’s eyes, were miniature portraits, literally of a loved one’s eye, though not necessarily indicating romantic love.
These could be worn as lockets or brooches, or otherwise saved or hidden.
Rumor has it, the Prince Regent wore a lover’s eye miniature of Maria Fitzherbert pinned beneath his lapel.

FAQ: Was Matilda Bethem a real poet?
Yes! Mary Matilda Betham (1776-1852) was a poet and a painter, among many other creative talents.
Her poem, The Heir, makes an appearance in NEVER SAY DUKE.

See yon tall stripling! how he droops forlorn!
How slow his pace! how spiritless his eye!
Like a dark cloud in summer’s rosy dawn,
He saddens pleasure as he passes by.

Long kept in exile by paternal pride,
He feels no joy beneath this splendid dome;
For, till the elder child of promise died,
He knew a dearer, though a humbler home.

Then the proud sail was spread! The youth obey’d,
Left ev’ry friend, and every scene he knew;
For ever left the soul-affianc’d maid,
Though his heart sicken’d as he said—Adieu;

And nurses still, with superstitious care,
The sigh of fond remembrance and despair.

Heroes and Heroines, by Book Cast of Characters, by First Name Named Animals and Pets Author's Note: Once Upon a Duke
“Humbug” has existed as a term since the 1700s, although it wasn’t widely popularized until Charles Dickens’ A Christmas Carol was published in 1843. His now-classic tale was unknown during the Regency period.
Perhaps because of this, it was so much fun to weave elements of homage into Benjamin and Noelle’s romance. You may also spot nods to other holiday classics throughout the entire 12 Dukes of Christmas series.
I hope you enjoy reading these stories as much as I’ve enjoyed writing them!
xoxo,
Erica
Author's Note: Kiss of a Duke
I hope you had as much fun reading about Penelope and Nicholas as I did writing them! Their story came to me from very diverse ideas.
One day, I was shaking my head about the over-the-top “You’ll need to hide from all the women!” advertisements of men’s colognes, similar to Hai Karate and Axe Body Spray.
I began to wonder what the Regency equivalent might look like, and asked myself: What if the creator is a woman, rather than a man? What if her ultimate goal is to give the power to women? And what if her love interest is a dashing London rake who hates her perfume because it cramps his style?
(In case it’s not obvious, I spend a good chunk of my work day giggling at my keyboard.)
“Saint Nick” is more directly related to Christmas. Not only is his name a synonym for Santa Claus, many of his quirks and actions are inspired by Christmas stories and carols.
He visits only one night, he spends all his time in his workshop, he always brings a gift, he can’t resist the cookies left for him on the mantel, he goes up on the housetop, and many more.
Plus, there’s Penelope’s prediction that he’ll one day be a fat man with white hair sitting around eating cookies!
Poor, long-suffering Nicholas. If it makes him feel better, I like to think of him as Hot Santa. Which means that Penelope—baker of cookies and lover of workshops—is destined to become his Mrs. Claus, apron and all.
Thank you for joining me on their journey to love. No matter what time of year you read this romance, I hope it brings you moments of good cheer!
xoxo,
Erica Ridley
Author's Note: Never Say Duke
Today, we have words like “on the spectrum” and “high functioning” to explain why Virginia experiences the world differently than others.
The Regency Era, when this story takes place, is one hundred years before the first use of the word “autism,” and even further removed from the resources and growing understanding that we have today.
Virginia’s parents would have had no frame of reference for why their child was not behaving as they wished. It would likewise be impossible for Virginia to fulfill their desires.
Finding friends, safety, and agency in a town like Christmas would have been a godsend for Virginia.
Here, she can interact as much as she wishes and seek privacy and less stimulation whenever she needs, allowing her to explore the world on her terms and at her pace, and finally realize she is every bit as smart, talented, and worthy as everyone else. She has a place. She is wanted. She belongs.
Someone as wonderful as Virginia doesn’t just deserve love. She deserves happily ever after.
As for Theo? The poor man never had a chance. 😉
xoxo,
Erica
Author's Note: One Night with a Duke

Black people have been living in England since the 1100s.

Numbers increased significantly from the 17th century onward, but the presence of Black people would not have been a surprising sight in Shakespeare’s time, and certainly not unusual by the Regency era.

Jane Austen’s unfinished manuscript Sandition features a sought-after mixed-race heroine. It is a truth universally acknowledged that an heiress from the West Indies in possession of a large fortune must be in want of a husband.

Long before slavery was abolished throughout the British Empire in 1833, free Black people lived a full range of lives, from paid servants to working class to fame and fortune. Musicians, sailors, preachers, businessmen, inventors, political activists. Black princes and dignitaries from African nations were celebrated in Polite Society.

There was still virulent racism, widespread disenfranchisement, and countless atrocities, despite one’s status and supposed freedom. Even African princes could pay a white sea captain for transport to England only to find himself sold into slavery instead.

For further reading, you may like Black London by Gretchen Gerzina, which at the time of this writing can be downloaded for free from the Dartmouth College website.

Author's Note: Ten Days with a Duke
Although the Oxford English Dictionary indicates the first recorded use of “sign language” as 1824, and the verb “to sign” as 1854, I decided to use these terms for clarity, rather than risk being misunderstood with vague words like “gestured” or “indicated.”
Sign language has been recorded within Deaf communities in England since 1570, although the first school, “Braidwood’s Academy for the Deaf and Dumb,” was not founded until 1760.
In the story, I’ve shortened this name slightly so as not to hurt or jar modern readers at the unfortunate terminology that was used at the time.
It’s important to note that reading lips is not easy, particularly for those who are born Deaf. It is often infeasible when there are more than two people in the conversation.
Interpreting also takes extraordinary effort. Because the two languages use different grammatical structures, it’s almost impossible to speak both at the same time without one or both languages suffering.
Even professional interpreters are rarely active participants in the primary conversation they are interpreting, which is why Olive must respond first in one language before repeating dialogue in the other.
I speak a different language at home (Spanish) than the one I use professionally (English).
Although my husband and I are fluent in both languages, we both have different interpretation styles when a situation forces us to act as translator to a mixed crowd.
I like to listen to the whole statement or story before recounting it, in order to keep as much flavor (tone, humor, inflection, timing, etc) to the original as possible.
Roy prefers to pause to translate every few words or after each sentence, in order to minimize the amount of time any one person is left out of the conversation.
There are no simple answers, and either way can be exhausting and frustrating. I empathize very much with all participants.
If you are ever in a situation where you do not speak the language, please be patient and understanding. It is often just as upsetting for the other party, who also desperately wishes it was easier to communicate.
And if you are the one doing the translating… Have an extra hug from me to you! 🙂
xoxo,
Erica 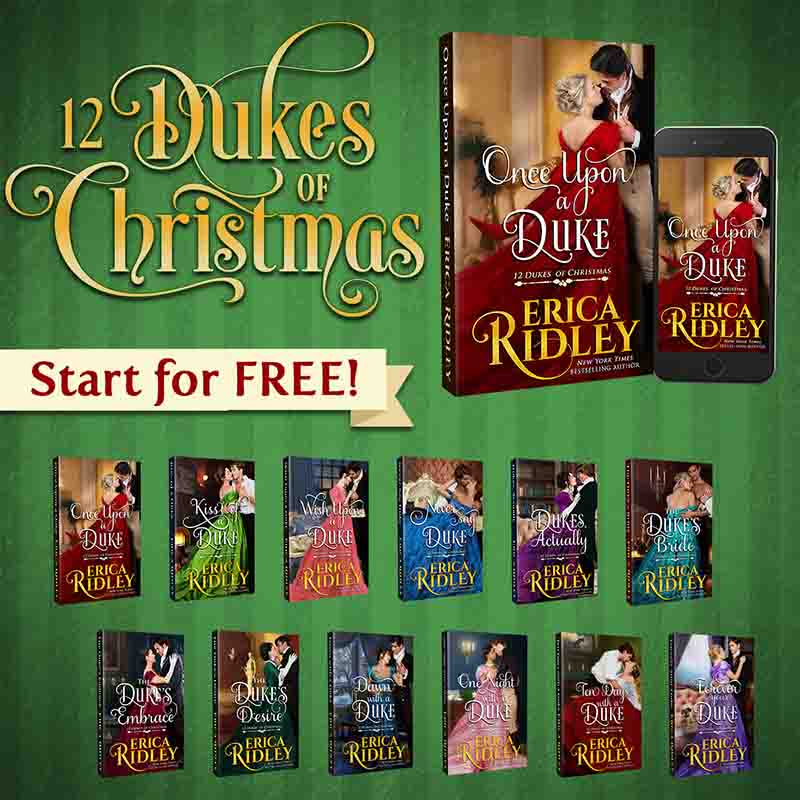